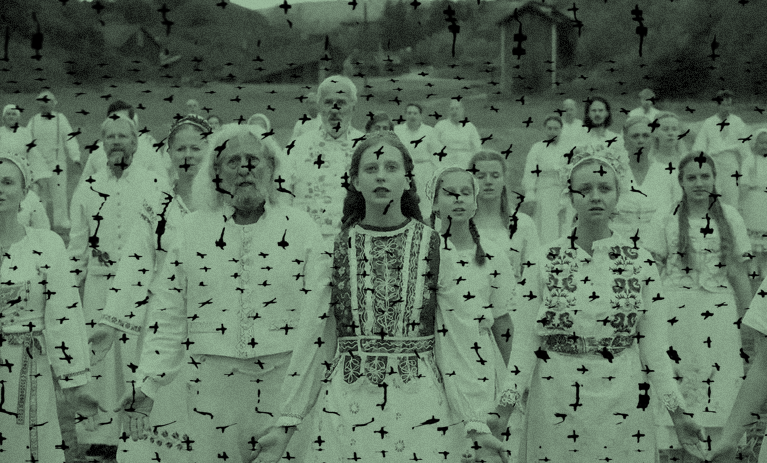 By Leslie Felperin
The Guardian, January 5, 2022

At three-and-a-bit hours long, this is worth every geeky minute if you’re into the genre of the title – think Witchfinder General all the way through to Midsommar. With its really smart deep dives into cultural criticism, this is a seasonal stocking overflowing with spooky fun. Writer-director Kier-La Janisse, founder of the Miskatonic Institute of Horror Studies, clearly knows the subject inside out, and finds the best authors, scholars and authorities to talk about the subject. But what’s really admirable is the way it is organised into digestible chapters that flow silkily from one subject to another, eased along by a spontaneous and colloquial voiceover from the director herself. As a film essay, the methodology is exemplary; if you want an education in an aspect of film over the winter and have finished watching all of Mark Cousins’ Story of Film docs, this offers an excellent next component.

Arguably there may be a little overload, as Janisse and co get so engrossed in tracing the roots and shoots of the term “folk horror” across film, TV, literature and even theatre, that by the end it’s hard to remember what the genre’s defining characteristics are supposed to be. But ultimately you’ll know it when you see it: in film terms, it has to do with stories in rural settings where ancient skills, beliefs or practices rub up against a newer form of civilisation. Think of the pagan islanders with their maypoles and sacrifices in conflict with the austere Christian policeman in The Wicker Man, or the witchcraft practices involving animal transformations and blood meeting the prim 17th-century pilgrims in The Witch, directed by Robert Eggers (interviewed here).

These are just two of the obvious touchstones. Janisse includes clips from hundreds of much less well-known movies, many from the UK, which might be considered the spiritual homeland of folk horror, but spreading out to include gems from Australia, Indonesia, Mexico and Iceland. The discussion of the trope of Indigenous burial grounds in American folk horror is especially fascinating, for example, particularly to see how contemporary Americans struggle to cope with their colonial past (see Pet Sematary) as well as attitudes towards death and grieving (Midsommar). Pro tip: keep a notebook handy – there will be loads of titles you’ll want to look up afterwards.

Woodlands Dark and Days Bewitched: A History of Folk Horror is available on 10 January on Shudder.