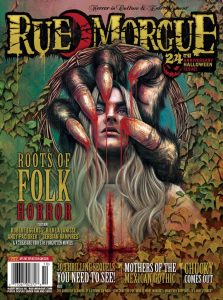 It was hard to keep this a secret as we were so incredibly excited about it, but every year Rue Morgue Magazine has a massive double Halloween issue, and this year they decided to focus on folk horror. Because of this, our film became kind of a centerpiece for the issue, with the documentary and accompanying ‘All the Haunts Be Ours’ blu ray box set from Severin Films getting ample coverage alongside pieces on Serbian folk horror, a roundtable featuring WDDB director Kier-La Janisse, Folk Horror Revival’s Andy Paciorek, The Witch director Robert Eggers and more, an interview with composer Timothy Fife, who scored the spoken word album of Linda Hayden (Angel Blake in Blood on Satan’s Claw) reading Arthur Machen’s ‘The White People’ that comes in our box set, and more, more, more